Before the 1935 session of the Legislature adjourned, it realized that many sections of North Carolina were unhappy with the existing prohibition law. Legislation was passed that allowed seventeen counties to establish ABC stores.

The first Wilson County Alcoholic Beverage Control Store opened on Tuesday, July 2, 1935 on East Nash Street in Wilson. This store was also the first legal liquor store to open in the State of North Carolina after Prohibition was repealed. On the first day of business, customers bought 825 bottles of legal liquor for $1,003. An article appearing in The Wilson Daily Times shortly after, stated that the “opening of the store was marked by the presence of newspaper reporters representing North Carolina’s leading dailies, press associations and magazine writers.” Another article, which appeared in the July 13, 1935 issue of The State Magazine, stated that the opening came with “no big crowds, no drunkenness, no excitement of any kind.” That same article also stated that “most of the liquor that has been sold in Wilson, by the way, is of the cheaper quality. However, they’ve got some high-grade stuff there too. It takes some little time, though, to get folks accustomed to paying $2.50 for a pint of whiskey, after they have been buying it for $1.50 per gallon.”

In May 2005 the North Carolina Department of Archives and History erected a Historical Marker on East Nash Street commemorating the opening of the state’s first, legal, post-prohibition liquor store.

Today, the Wilson County Alcoholic Beverage Control Board operates a warehouse and five ABC stores in Wilson County. All of our ABC Stores are self-service type stores and boast a wide variety of brands for our customers to choose from.

The Wilson County ABC Board has the authority, by law, to buy, sell, transport, and possess alcoholic beverages as necessary for the operation of its ABC stores. In addition, the ABC Board adopts its own policies and procedures, determines the opening and closing hours of its stores, provides for management of each store in Wilson County, and ensures the distribution of its profits, all in accordance with the rules of the North Carolina ABC Commission. 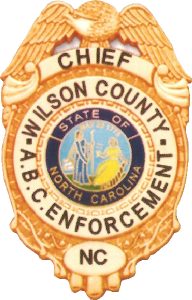